I don't have many pics of the actual nights this runs on Halloween. Obviously gets very dark and I spend about 4 hours straight pushing this little vehicle back up the track. I don't know these little kids but it's a great representation of the age of little trick-or-treaters I made this for. I wanted a haunted ride that wasn't too scary or crazy. There are a lot of great ones like that in my neighborhood but I wanted something for these little guys as well. 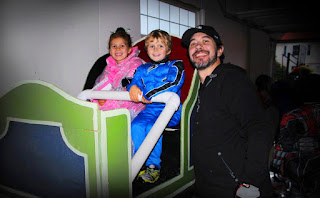 Posted by Unknown at 9:54 AM No comments:

Here is a version of the coaster with two small drops added to it. Tricky to do. I cut the curved drop shape out of a 2 x 6 and used kerf cuts to bend the wood on top of it. Worked great. The track was much stronger than I thought it would be. Held some pretty big dad's with their kids! 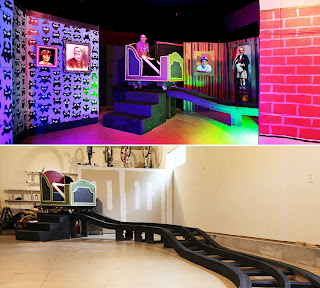 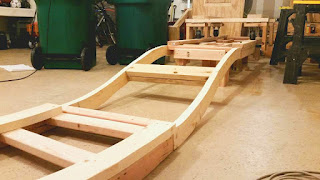 Posted by Unknown at 9:43 AM No comments:

We set up the track and started testing the new height and curve. It's a little bigger than last year. I evened out the lift hill because I decided not to connect the track into a complete circle. Two reasons: one, I wanted parents to be able to come in and take photos, and two, in case it rains, I want people to be able to come into the little horseshoe area and stay dry. The test looks good and the little vehicle makes it's way down the curved hill no problem, even with little ol' me. Lil 200+ lbs me.

The bottom pic is funny to me because it's right after I told Annie I think it will hold two people around the turn. I'll post a couple links of video of Annie making a short solo test run in her pajamas.

I joked about creating a lift hill so the little kids could feel like they are on a real ride. But usually when I joke about things, I end up doing it. I drew it up on the computer first since this was a little more tricky than just dragging it up. I need it to be pulled from the back end so when it gets to the top, it releases and rolls down by itself. Again, a little tricky because it also follows a center rail as well. So I notched out two small strips and built supports up from under the track. Those supports are pulled by a winch from the top.

I don't log how much time I work on this project. Usually Sept & Oct I start working on it. And even then mostly when I go to the garage to listen to the Cubs on the radio since I don't get them on t.v. This took about four Cubs games to figure out and build.

We first tested with a stuffed animal. When that worked, we had Evan climb in. It lifted him no problem. I'm next once I build more supports and connect it to the rest of the track. Pictured below is our first go at it with Curious George. The ramp under it is now gone and replaced with a different lift system that hugs the track but you can see the general idea.

Annie and Evan constructing some new props for this year. Evan is building a coffin that a little skeleton will be trying to get out of. Annie does a lot of the painting and artwork for the ride.

Gravity speed test number one. The helmet was for effect. It intentionally goes very very slow but didn't want Mom shutting the project down for breaking safety rules. 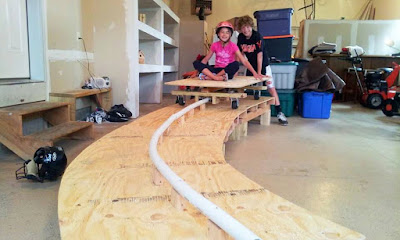 I took a video the day we starting breaking it down. Below is a link to a video of Evan pushing Annie down the track right before we took the rest of it apart. There was no end pieces so we had to catch Annie before she fell off the track.

Annie doing some touch up work on the pop up creature. We made him from a little two dollar ghoul head I bought from Walgreens. I connected some pvc to slide up and down and power it with my shop vac. It's very funny and works pretty much like the ones in the real ride.


Here is a video of how it works:
https://www.youtube.com/watch?v=sE9bHp3CZ7c 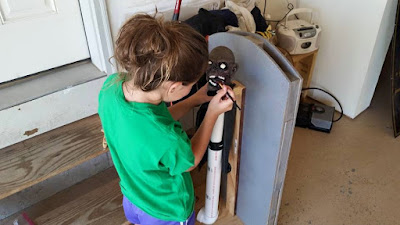 Sets are very easy and cheap to make - furring strips, cardboard and little hinges. These pics show how they are put together. Hinged, so they fold and stand by themselves and collapse when being stored. 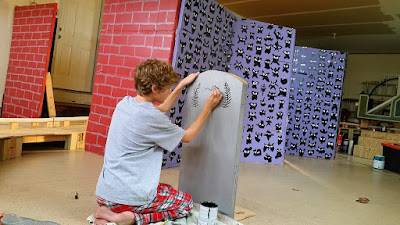 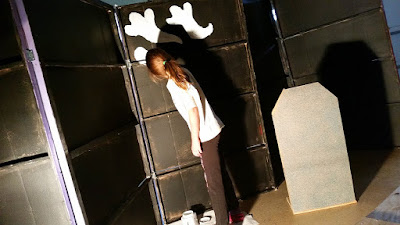 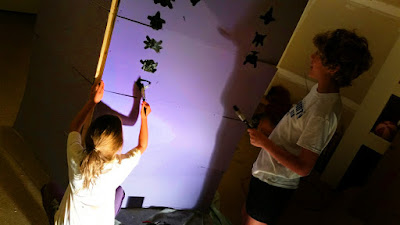 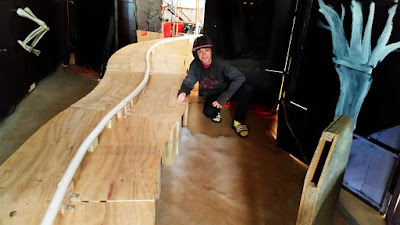